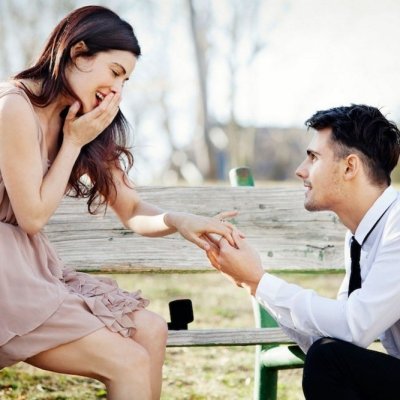 We’ve all heard about some awful marriage proposals. I mean, aiming for the world’s most romantic viral proposal video is fine…as long as you know that she’s going to say yes. Social media recently went mad with people recounting their worst proposal memories, and some of these are probably the most awful marriage proposals in history. Just be glad you weren’t asked like this!

1. Think before You Act

Some of the most awful marriage proposals occur when the man didn’t really mean to propose at all. My favourite story? A man who grabbed his girlfriend a takeaway from Taco Bell. She asked for hot sauce, he remembered…but Taco Bell had written a cheeky “Will you marry me?” message on the sachet. She was thrilled, and he was confused, and surprised. Ouch. There are plenty of tales of men buying diamond rings as impressive presents, too, not realizing the connotations. Think before you act, people.

Theme parks seem to be another common error for proposals. Forget perfect photos and an amazing atmosphere – this seems to be about getting dramatic photos, and usually, getting very wet! One lucky woman recounted the story of her proposal, which took place at Disney World. Cute, right? Until you hear that he popped the question on Splash Mountain, right before the drop. Not only were the photos ruined, but he dropped the ring, too.

We’ve all seen the romantic movies where a break-up makes both parties realize how much they love each other, and ends in hot sex and a proposal. But we don’t really want that…imagine telling your friends how it happened! You’ll remember that row forever. Some guys, though, can’t seem to find the words. In one particularly bad case, a man gave his girlfriend panic attacks so bad that she ended up hospitalized, after uttering; “I think we should talk…There’s only one way to fix this now” in the lead-up to his proposal.

Gentlemen don’t mention a woman’s weight…especially in their proposal. Imagine the joy of being asked to marry your Mr Right, and then hearing him criticize you!? It’s more common then it sounds. One romantic even presented his girlfriend with a months’ worth of meal replacement shakes along with her ring…and another asked if she wanted a very long engagement so she could lose all that weight. Not exactly sweet-talking, then.

The old ring-in-the-champagne is classic, and something most restaurants are happy to help with. That doesn’t stop people wanting to try and better it, though! We’ve heard everything from choking accidents to rings being hidden in chicken, cake and even being presented to the wrong people. Rings are expensive, people, and simple is often better. Put it in the champagne, and you have nothing to worry about. It won’t be half as pretty once it’s been digested.

I really hope this one isn’t true! Rumour has it that a man found out that his ex-girlfriend had given him HIV, and that in turn, he’d spread it to his new girlfriend. After a few nights out on the town to get over the shock and upset, he decided to apologise to his girlfriend…with a proposal. The ring sellotaped into a cute card was certainly a surprise, but the mention of HIV in the message could have been a little too much.

They might not sound like the most awful marriage proposals, but drunk or drug-induced proposals have to be some of the most painful. So many people have reported being thrilled by a spontaneous proposal, only to spend the next days and weeks wondering if their partner even remembered proposing. Awkward, and painful!