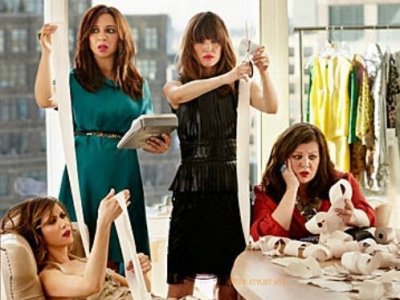 Blooper reels can be just as entertaining as an actual show or movie. It's fun to see your favorite actors and actresses mess up, because it proves that they're human, and that they make mistakes. It also gives you a chance to see their bright smiles, instead of seeing them so serious all of the time. Here are some of the best blooper reels out there:

This is one of the blooper reels that are just as funny as the film. Even if you haven't seen the movie, you can appreciate Kristen Wiig and Jon Hamm's humor. They prove that some of the greatest actors out there have a hard time keeping a straight face. When you're creating a comedy as hysterical as Bridesmaids, you're bound to crack a few smiles.

Everyone's seen the show, so you're already familiar with the entire cast. This video consists of Conan O'Brien interviewing the six actors, and then shows clips from the show that back up their points. Whether you love physical comedy or witty humor, you'll love these bloopers.

Even though the show was serious, the actors had fun on set. Just like any other show, Breaking Bad had actors that messed up, and bloopers that are highly entertaining. Bryan Cranston is a funnyman at heart, and Aaron Paul is adorable, as always. Of course, if you haven't finished the entire series, you might want to wait to watch this video. You don't want to spoil anything.

4 How I Met Your Mother

This video covers years of bloopers from the hit show, so make sure you have enough time on your hands. It'll take almost an hour to watch, but each minute will be worth it. The cast is like a family, so watching them interact is both adorable and humorous.

It's been a while since this show was on the air, so it's time to refresh your memory. Lost was an amazing show with equally amazing actors. Even when they forget their lines, they're able to entertain.

You either love this show or can't stand it. If you've seen every episode, then you're probably dying to see even more of your favorite characters. Well, here's your chance to spend more time with the gang. If you're used to seeing Jim Parsons as Sheldon, then it'll be strange seeing him curse, but well worth your time.

TV shows and movies aren't the only places that contain bloopers. Live television is also subject to plenty of mistakes. You've probably seen a few while watching the local news or checking the weather, so you know how hysterical they can be. Watch these bloopers from live broadcasts, and be thankful that you're not being taped during your most embarrassing moments. That's the plus side to not being on television every day of your life.

If you have the time, watch all of these blooper reels, and then head to YouTube to find some more. There are hundreds of them waiting for you to watch them. If you can't find bloopers of your favorite show, then check out the DVD to see if there's a special feature on the tape. Do you know of any other great blooper reels?