7 Crazy Things Cats do That You Won't Believe ... 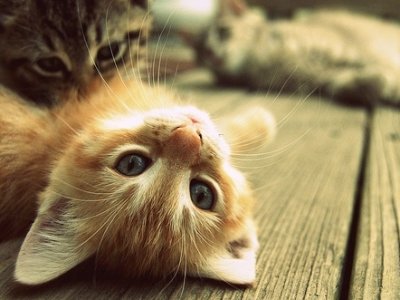 There are so many crazy things cats do. Cats are known for sleeping all day, not doing much and being pretty indifferent to their owners, but in reality, cats all have unique personalities and get up to all sorts of mischief. Here are some crazy things cats do that I see on a regular basis from my crazy cats Billy and Luna.

My nine-month-old kitten, Luna, loves nothing better than to suckle on my ear lobes, but if she can’t get to them, she makes do with my clothes. Or sometimes, she’ll surprise me by going for my nose or even my lips (yuck) when I’m sleeping. This crazy thing cats do isn’t uncommon in kittens, especially those that have had a difficult first few months of life like my little one.

2 Using Their Owners as Climbing Frames

If I bend over just to pick something up, my tomcat Billy will sometimes jump onto my back and attempt to make himself comfortable. When he’s feeling particularly needy, he’ll climb up my legs (ouch) and up my body until he’s sat on my shoulder.

3 Hiding in Anything They Can

I can’t count the amount of times we’ve lost Billy and found him curled up asleep in a bag somewhere, or accidentally shut him in a cupboard because we didn’t even notice him slink in. Once he climbed into a mostly zipped up suitcase and I came along, did it up all the way and put it up high without realising he was in it. Then I had to try and work out where the yowling was coming from!

Another crazy things cats do is eating all sorts of things that you wouldn’t expect. I don’t give them table scraps, but sometimes they manage to get into the kitchen and help themselves to leftovers. Favourites have been peas, roast potatoes, spicy curry and pasta (cooked or dried!). Luna even managed to open my bag, remove some clingfilm and devour a fairy cake quite recently.

The reason my crazy cats get into the kitchen is that Billy’s a master at opening doors. Some he can just head-butt until they’re open, while others require jumping up and pulling down the handle. We don’t get a lot of peace, as you can imagine. I’m quite used to having two pairs of eyes watching me shower.

6 Asking for a Tummy Rub

Typically dogs are known for rolling around on their backs and asking you to rub their tummy, and a lot of cats don’t like having their tummies rubbed. Not my two though; they love it! Sometimes you can sit and rub their tummy until they fall asleep.

7 Snuggling under the Bedcovers

We don’t get a lot of say about where they sleep as they can open most of the doors, and sometimes they climb under the bedcovers and sleep up against my legs or my tummy. The problem is that this can start a game, often starting at around 5:30am, where one repeatedly pounces on the other moving underneath the covers. This is another of the craziest things cats do.

These are just 7 of the weird and wonderful things my cats do. There are tons more, but I’d be here all day! What crazy things do your cats, or other pets, like to get up to?