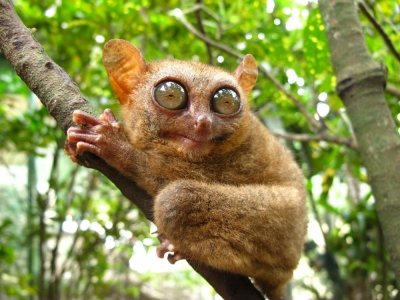 What are the cutest wild animals you've seen? Ever since I was a kid, I've loved animals. I used to watch those “Wild Kingdom” shows and wonder what it would be like to be out in the forest/desert/wherever they were to be with the animals. I thought of being a zookeeper, but learning that I'd have to clean out cages and feed things that could easily bite me soon cured me of that. Now I just to enjoy them through a computer screen or, at one point, my sister's house. These are, in my opinion, some of the cutest wild animals I know of. I'm sure you've seen them before, but who doesn't like cute things? That, and some of the videos are funny.

This adorable guy was just discovered less than ten years ago! Actually, let me rephrase that. The olingito-a smaller version of the olingo and part of the mammalian family-has been around for a lot longer, but it wasn't noticed by humans to be a species on its own until fairly recently. It looks like a cross between a raccoon and a teddy bear and is about the size of a house cat. You just want pick it up and pet it! I'm not sure how it would react to that, but it's definitely one of the cutest wild animals around.