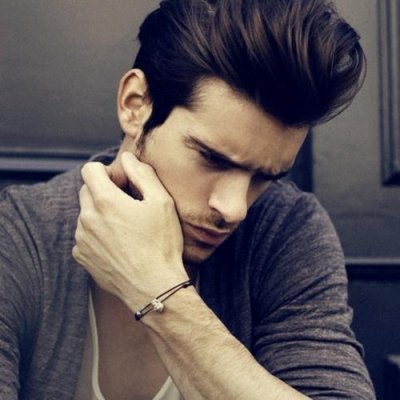 Have you ever wished you could climb inside of your boyfriend's mind? Well, that's not the best idea, because it's a dirty little place. You wouldn't want to remain in there for very long if you wanted to keep your sanity. However, since we can't help our curiosity, here are a few GIFs that'll show you how men really think:

1 Sexual Tension is to Blame

Men like to believe that the world revolves around sex. So if he has a fight with a girl who allegedly hates him, he'll assume that she secretly likes him. Her hatred clearly stems from her sexual frustration over wanting to get in his pants. There's no other possible explanation.

This is the greatest reaction you can get from a man, because it means you're about to win an argument. When you hit him with something that he wasn't expecting, he'll be speechless, because he already planned out what he was going to say to you and you ruined it in one fell swoop. Whenever you see a man looking like this, give yourself a pat on the back for being the queen of couple's spats.

This one shouldn't be surprising. If you're ever romantically staring into your boyfriend's eyes, wondering what could possibly be going through his beautiful mind, it's sex. No doubt about it. If he loves you, he also loves your body. That means he wants to see it as often as possible, no exceptions. It doesn't matter if you're in a classroom or at church--he's still thinking about all the things he wants to do to you.

Men aren't used to taking hours to prepare for an event, like women are, so when he actually takes the time to step into something fancy, he'll think he's the hottest thing in town. Whenever he wears a suit, he won't look in the mirror and wonder if he looks good--he already knows he looks good. There's no question about it in his mind. Your compliments will only prove to him that he was right all along.

If you're dealing with a man who isn't as confident as the ones above, he's probably spending all his time second-guessing himself. When he's stuck inside with his buddies, he'll be fantasizing about what he could be doing out at the clubs. Just because he isn't there doesn't mean he doesn't want to be.

In all seriousness, men are just like women are. There's not all that big of a difference between how they think and how we think, so don't treat them like a different species. We're all human, after all. Which celebrity do you think looks the hottest in these GIFs?