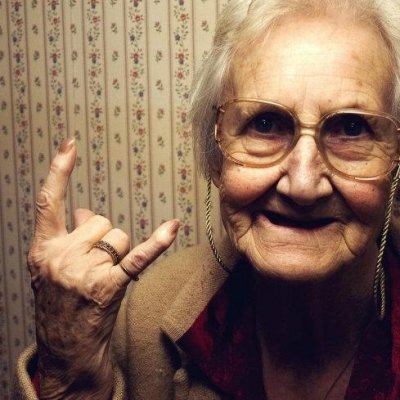 This is all real life advice the hilarious grandmas and grandpas shared with their youngest! See if you've ever heard anything crazier!

My Grandma (a model during the depression era) used to tell me, "Be proud when you walk! Throw those tits out!" When I would tell her I was only nine and I did not yet have tits, she would just say, "You guess where they are gonna be and throw that out!"

My grandma once chastised me for wearing underwear to bed because I need to "let my taco air out". What bizarre advice have you gotten from the older and wiser?

An old fisherman in Alaska once told me that: "Life is like a roll of toilet paper. The closer you get to the end, the faster it goes. So don't waste it." So far he's pretty spot on. And I must admit, after this quote I use toilet paper less deliberately. I guess that symbolism did sync through!

4. My Grandma is a Playa

My grandma, whilst once discussing my new boyfriend, was asking why I was only dating one man. Her 87 year old advice to 23 year old me was That in her day she would line up multiple dates, with multiple men to try them out, and once you went on enough dates with one person, then you would go steady. That was the norm. I had to nicely explain to my super conservative Irish catholic grandmother that that is what we so kindly refer to as a "player" nowadays. Her response:
"Well, I guess I was a player then.”

"A cigarette's got fire on one end and a fool on the other." --my grandpa when I was like 12

Wait until you are pregnant...
Some favourites have been:
-Don't lift your arms above your head you will hang the baby with the cord;
-Don't lay on your back, or you will die (well fuck, that's serious);
-Drink milk so you can breast feed (pretty sure that's not how it works); and
-Don't poke your belly button you can poke your babies soft spot in their skull and they will die.

Hot tip old ladies, just say congratulations and leave my care up to the OBGYN I pay for advice...

My grandma warned me that boys "make a tent" in bed every morning. Thanks Grandma :/

My Aunt Carol never threw food out. Expiration dates had no meaning to her. She always said,
"No, no. It says "BEST" before sept 2014."

So, how about your grandmas - any weird advice? I'm sure there must be some! Pass on their wisdom in the comments!