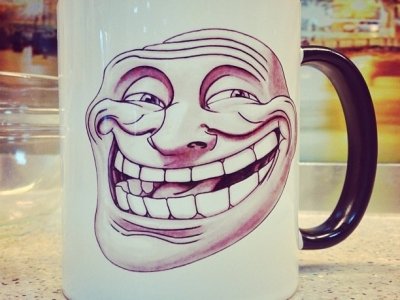 Regardless of what it's about, every site has its own set of internet personalities. I've been moderating forums in some form for nearly eleven years; in that time, I've come to see (and become) my fair share of interesting and sometimes mind-boggling characters. Most of them are harmless, but occasionally you'll find one that makes you want to punch your screen so hard that your hand will hurt for a week. You've probably already met them but, in case you haven't, here are some of the more, um, colorful internet personalities I've come across. Perhaps my names aren't as clever as ones on other sites, but they work.

This is on of the best-known and least-liked internet personalities. He can be compared to the kid who kicked your seat on the school bus or would poke you in the back during class. The really sad thing is that most of the trolls I've dealt with aren't schoolyard brats-they're old men. Instead of being my nephew's age (who we'd expect this from), they're my father's age. Grumpy Old Men, except without the bathtub shots. At least Walter Matthau was funny.

This is the guy who would shove people in their lockers every morning before class. He can't stand the idea that he can't boss people around in his “real” life, so he tries it online. Fortunately, it never works because the whole “strong arm” thing doesn't fly when people can't see you. That, and it's easier to tell someone to shove it through a computer screen than through your locker door.

This guy finds whatever issue that is most likely to upset everyone else in the forum (from politics to religion to Lindsay Lohan's real hair color) and drops it like a bomb in pretty much every discussion thread, relevant or not. Godwin's Law (debates must stop if someone brings up Hitler or the Nazis out of context because intelligent conversation is no longer possible) was created for people like him. This is often done to distract from his own mistakes or weak arguments, but sometimes he does it just for fun. Either way, don't take the bait.

The childhood song, “Nobody loves me/everybody hates me/guess I'll eat some worms” is likely to play in your head every time you come across one of her posts. It doesn't really matter what the thread is about, although this happens more often on political- or religion-based forums. If you disagree with her, it's automatically attributed to your hostility toward whatever group she identifies with at the moment (it tends to change) rather than her actual point. She does this to call attention away from her weak arguments. “Oh, so is this because I'm an X?” “See? They just hate me because I'm a Y.” No, we hate you because you're a moron.

This is the political-forum denizen who never directly answers a question but talks his way around it, mostly by putting up a bunch of big words that he thinks no one will understand. Sometimes he knows what he's talking about, but most of the time it's just a bunch of random nonsense he's hoping no one will call him on. When it doesn't work (and it rarely does for long), he runs to another forum. Either that, or he claims that everyone else is reading things wrong and/or “picking on” him.

This is the guy who has a "pet issue" that he feels the need to bring up anytime he can, even and especially when it's irrelevant to the topic. He thinks he's “educating the masses,” but his message falls flat because people get so sick of hearing him beat the same drum that they either scroll past his posts entirely or only answer pieces at a time. Occasionally someone who is new to the game will attempt to reason with him, but it's useless. The best strategy is to change the subject because, in my experience, this person is a really nice guy when talking about anything else.

This isn't a religious title so much as the person who claims to know Exactly How Everyone Should Live Their Lives and never misses an opportunity to talk about The Good Old Days when everything was the way he wanted it to be. Everything-from 9/11 to the stock market crash to your bad haircut-is the direct result of XYZ Major Social Change or ABC Completely Irrelevant Action. Occasionally he'll quote from Nostradamus or some holy text to prove how he “told us so,” but he usually gets it wrong and/or takes things completely out of context. Since you'll never convince him of anything, it's best to ignore him.

These are just a few of the varied internet personalities I've dealt with when moderating discussion forums. Believe it or not, the characters are what makes the board interesting-the subject is secondary. What about you? What sorts of personalities have you encountered online? Discuss!