Ready for Your Next Crush These Videos Will Have You Head-over-Heels with the Try Guys ... 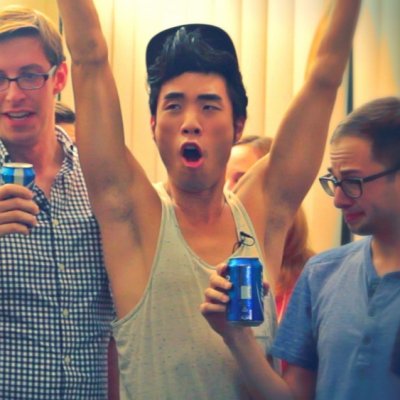 Obvs, not safe for work, but oh so very worth a watch when you're at home and you need a good laugh. Truly, this may be the best 7 minutes of your day, right here.

My favorite: the racy bodysuit. A very close second is the bow suit. So. many. giggles!

Again, not safe for work, but you must watch. MUST. That's what lunch hours are for, right?

I'm not sure why so many of these videos feature the Guys in women's clothing — possibly because we do wear some pretty ridiculous things in pursuit of men — but I love every single one.

If the sexy nun or the ladybug don't make you laugh out loud, you're probably an alien being unfamiliar with what we humans call "hilarious."

Now we all know who REALLY broke the internet... and it wasn't Kim K.

I know what you're thinking: the Try Guys are, all four of them, prettier than me. And Eugene? He's plain sexy.

You just know this video "experiment" had to lead to four of the worst hangovers in history.

10 The Try Guys Shoot Guns for the First Time

This is probably the manliest thing we've ever seen the Try Guys do — yet. Apparently they're working on a MMA video. That can't end well.

Whether you watch this one for the Try Guys or the Warwick Rowers, it's great (nude) fun, though (as the title implies) not safe for work.

Trunks? Not so bad! But it gets progressively... smaller?... from there — Square-cut Speedo, to Speedo.

It's just jerky, how funny can taste-testing it be? Pretty wicked funny, as it turns out.

Now that you've watched (and laughed madly at) all of these Try Guys videos, it's time to find out which one should be your boyfriend: buzzfeed.com

Me? I got Zach Kornfeld. Who's your Try Guys crush?