The Absolute Worst Ways to Hit on a Woman ... 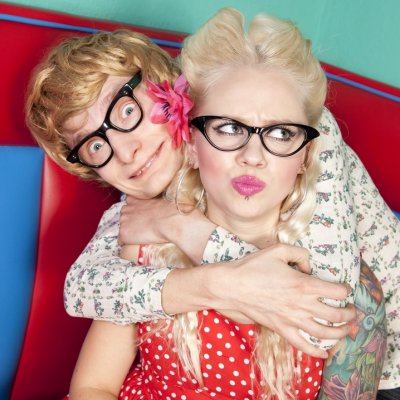 Even the most attractive men have trouble with women. Why? Because they use bizarre tactics to try to get our attention. Instead of being honest, they'll use tricks aimed to impress us. Here are the absolute worst ways to hit on a woman that way too many men use:

It's nice to know that a man finds you attractive, but all he has to do is smile and compliment you to get the point across. If he decides that saying "you look beautiful" is too cliche and says, "I lost my phone number, can I have yours?" instead, then you're going to roll your eyes. Once in a while, the stars will align and a corny pickup line will actually work, but most of the time it'll fall flat.

No woman has ever heard a man whistle at her and make a crude comment about her butt, and then ran over to ask him on a date. If a man is willing to yell at random women on the street, what else is he willing to do? Unless you want to end up with a convict, avoid catcallers at all costs.

Sure, some men are shy. Sure, it's hard to get up the courage to walk over to an attractive woman. However, if he's just staring at you from across the room, without blinking or looking away, you're going to be more terrified than turned on. You want a boyfriend, not a partner for a staring contest.

Some men try way too hard to impress their crushes. If he casually mentions his great job or how often he exercises, that's fine. However, if he takes out a list of all his greatest accomplishments, run in the other direction. If he needs to point out all his good qualities, there's probably not that many of them. Nobody wants to date a Kanye West.

5 Trying Too Hard to Be Manly

It's sweet when he opens doors for you and offers to pay for dinner. However, he doesn't need to open every single pickle jar in your house and pop the hood of your car when it's functioning just fine. Trying too hard to be manly makes him look like he's compensating for something.

It's no secret that we love the smell of certain colognes. It can make us weak in the knees, but only if he applies a little bit of it. If he sprays himself until he smells more like a skunk than a human being, we won't want to be around him for long. Guys need to learn that less is more.

Having a few drinks will loosen him up, but if he has one too many, he'll start acting like a slob. When he's too drunk to hold a conversation, you'll never agree to hold his hand--let alone anything else on his body. Even though he'll be going home alone, at least the alcohol will trick him into feeling like a stud.

Men need to realize that hitting on women isn't a game. They should stop trying to use gimmicks to attract us and just be themselves. It's way more attractive. Have you ever been hit on in any of these ways?