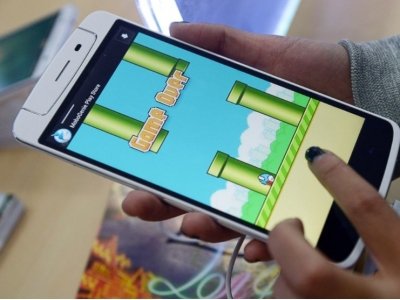 There are only four more years until the next Winter Olympics. That’s more than enough time to learn to snowboard without breaking your neck. If you’re lucky, you’ll get to meet Shaun White, and have some adorable ginger babies. It sounds impossible, but there’s a higher chance of securing a place in the Olympics than there is of playing Flappy Bird and getting past level three.

At least during the Hunger Games, there’s a winner. When you play Flappy Bird, the game just keeps going on and on. There’s no end point in sight. Katniss and Peta may have been able to avoid dying in the arena, but they’d die over and over again if they tried out Flappy Bird.

A breakup is like getting hit by a pipe on Flappy Bird. It knocks you down, but you know you’re going to get right back into the game once you recover. If you can’t find the one you’re meant to be with forever, have no fear. You’ll get married before that bird makes it ten feet away from its starting point.

There’s no magic pill that will help you lose weight, but you can diet and exercise. Meanwhile, there’s no cheat codes to use during Flappy Bird. There’s no solution to your repetitive losses. If the number on the scale keeps rising, you know that running every single day can help it go down. However, if you keep getting destroyed by those pipes, there’s no explicable way to get to a higher level.

All you have to do is pick a few numbers, and you could win a million dollars. It’s all about luck, with no skill involved. But when it comes to Flappy Bird, you never know how much luck is actually involved. It didn’t look like you hit the pipe, so why is it game over? Did you do something wrong, or is the game just out to get you? Oh well, at least winning won’t grant you any money, so there’s no sense in obsessing over it.

With a little bit of stalking, anything is possible. If you believe you can get a high score on Flappy Bird, then you shouldn’t rule out the possibility of meeting Leonardo DiCaprio. Of course, when you meet him, he’ll probably be stuck staring at his phone, playing the game himself.

7. Eating Only One Chip

Once you have one, you have to have more. It's the same way with Flappy Bird: once you play it once, you have to try it again and again. Of course, if you have to choose between playing one round of the game and eating one chip, the latter is by far the easiest.

If you have the game installed, you’ve probably played it hundreds of times. There's something about it that's incredibly addictive. What’s the highest level you’ve reached on Flappy Bird?