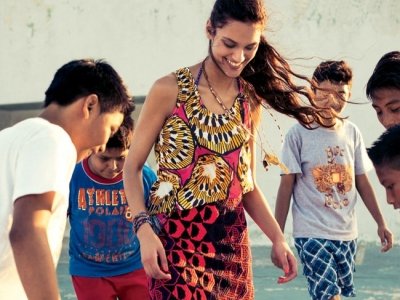 It's hard for some of us to remember any of the things we did before the Internet, although some you lovely ladies born in the 1990s may not remember a time without it. What did we do before DSL, streaming movies, and instant connections to our family and friends? There had to be something – even those endless evenings when none of the local numbers for your AOL dial-up connection worked, you had to find some way to entertain yourself, right? What on earth did we do? Well, just in case you're in need of some nostalgia – or if some of you younger readers need some information for your next history report – take a look at this very, very tongue-in-cheek view of some of the things we did before the Internet ruled everything.

This is one of the most popular things we did before the Internet. We went outside, where there's sunlight, and rain, and bugs, and other people. Okay, okay, of course we all still go outside, but honestly, it's so much easier not to now. If there's a day where you simply don't feel like stepping one foot out of your house, you just don't. You don't have to go to Blockbuster, you can find takeout numbers and menus all over the Internet, and you can text or Facebook your friends instead of actually going to see them. Fortunately those days don't happen too often, but I'll will say that sometimes I feel like one of The People Under the Stairs when I go outside after working (on the Internet) for several hours.

2. We Had Polite Disagreements

I miss polite disagreements. Where did they go? Did the legion of Anonymous really defeat them? Once upon a time, polite discourse and civilized debate were … well, okay, maybe that's an idyllic viewpoint. There have always been arguments and there always will be arguments, but before the Internet, we at least said more than just, “You suck, omg, who asked for your opinion, it's wrong and I hate you!” What is that? What? The next time you feel the need to criticize someone online (see: because of this article), at least use some colorful epithets, even if you don't want to debate your point.

3. We Used the Phone Book

They still make phone books, of course. I know this because every spring, we get at least two delivered to the house – I have no idea why. Before the Internet, we had to look up phone numbers, and then either memorize them or stick them in one of the early, ridiculously complicated speed dial slots. As it stands, I can't remember the last time I dialed an actual number; between the Internet and smartphones, all I have to do is look up a number on Google and thumb it open. I think that's awesome though, to be honest; phone books are a huge waste of paper.

4. We Waited Forever for Things

Forget ordering off Amazon, Zappos, Overstock, or ModCloth. Once upon a time, we ordered from catalogs, the backs of magazines, and the TV – and that crap took forever. You either had to send a check or pay over the phone, but even still, it would be 6-8 weeks (or more) before you got that necklace with your name written on a grain of rice you saw in the back of Teen. By the time your stuff arrived in the mail, you'd forgotten all about ordering it.

Speaking of which, we used to buy magazines instead of reading them online. I know people still buy magazines, but all the juiciest stories are available for free. Besides, there was nothing like waiting for the newest edition of Teen or Sassy. When you wanted your teen idol fix, it was all about snagging the latest issue of Bop and Big Bopper (they had better poster stock, ah-thank-you) from the grocery store.

6. We Skimmed through Source Books

When I was in high school, the Internet was just becoming a widespread thing. Few kids were lucky enough to have computers, let alone AOL or NetZero accounts (AOL for the win!), and as such, teachers were skeptical about online sources. That meant trip after trip to the library, and even the most diligent students were known to skim their encyclopedias, reference books, and other source materials for the information they needed. I much, much prefer the “Find” option on my browser, thanks.

7. We Whined about Being Bored

We whined about being bored a lot. Our parents would tell us to go play with our toys or our dolls or what have you, and goodness knows we had lots to do, but there was something satisfactory about bitching and moaning about having nothing to do. Everyone still does that, of course, but now it goes up on Facebook or Twitter, so other bored people can sympathize with us.

This is a humorous slant (I hope!), but it really is hard to remember how we entertained ourselves before we had our entertainment delivered to us. These pastimes aren't all out of reach but they're definitely not as common, and that's kind of sad. I say “kind of” because I've been known to flip out when our power goes out or I briefly lose the 4G connection on my phone, but hey. I like the Internet. How do you entertain yourself during your no-tech days, or when you lose the lifeline of your Internet connection? Do you remember any of these things?