The Biggest Things You Should Never Say to Your Man ...

If a guy has feelings for you, then this statement is going to crush him. While you're meaning to say that he's a close friend, all he's hearing is that you'll never date him, and that the thought of kissing him seems incestuous. Although it appears to be a harmless comment, comparing a guy to your brother is one of the things you should never tell a man.

2 We Need to Talk

Are you planning on breaking up with him? Because that's what he's going to think as soon as these words pop out of your mouth. Needing to talk is never a good thing, so even if you are actually planning on ending the relationship, start the conversation in a different way. There's no reason to scare the man.

Weight loss for women in their 20s 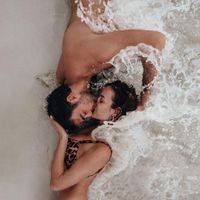 Proof That the Small Things in Life Are Worth the Most ...

3 My Ex Loved That

If you're watching a movie and casually mention that your ex loved Jennifer Aniston, your current boyfriend is never going to forget it. Every single time Friends comes on, he'll be reminded of your old relationship. It's best to keep little tidbits about your ex to yourself, because there's no reason to make him flinch when he watches the trailer for the Horrible Bosses sequel.

Why would you want to insult the female gender? Women can throw, catch, and run just as well as men can. There's no reason to degrade your gender by telling a man he throws like a girl. It won't bruise his ego. It'll just make you look silly.

Some men are okay with this statement, because they know you mean it lovingly. Other guys will be offended, because you're treating them like a pet or an object. You can't own another human in this century. Your boyfriend isn't your personal possession. He's just your mate.

If someone gets you a present, be thankful for it. Don't look at it, toss it aside, and ask for the gift receipt. Be happy that he attempted to do something to make you smile, even if it's a fake smile. But next time a holiday comes around, make sure to drop bigger hints about what you actually want him to buy you.

7 Your Friend is Hot

No man wants to know that you think his best friend is hot. He'd prefer to live in ignorance, and assume that he's the only person that you could possibly find attractive. Sure, he knows you have a thing for Leonardo DiCaprio, but other than that, he wants to think you only have eyes for him. Don't ruin his ridiculous thoughts with the truth.

If you want to keep a man happy, you'll have to keep certain thoughts to yourself. "If you have nothing nice to say, don't say it at all." What have you innocently said to a man that he's been offended by?

weightloss
Weight loss for women in their 20s
fashion
7 Grown up Ways to Wear the Preppy Trend ...
hair
7 Ways to Style Your Bangs and Look Fabulous ...
fashion
7 Gorgeous Fashion Websites Thatll Urge You to Splurge ...
love
Proof That the Small Things in Life Are Worth the Most ...

What does it mean when a guy runs his fingers through his hair ...
What can i use pickle juice for ...
What's parsley good for ...
How do i know if im gaining weight ...
How to get a guy to notice me ...
How to make your cousin have a crush on you ...
Why is chicken meat white and beef red ...
How to flirt with a guy in class ...
What illness is acquired by eating contaminated food ...
Is meat a good source of calcium ...