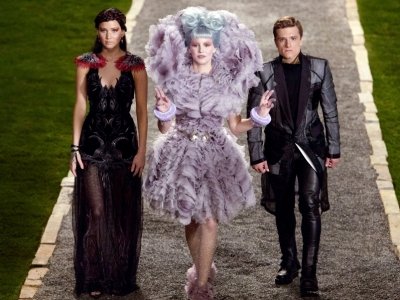 1. Are You Looking for a Boyfriend? Because I Volunteer as Tribute

This is one of the most obvious of the Hunger Games inspired pick up lines. Even if you haven’t seen the film, you’ve heard of the ‘volunteer as tribute’ scene.

2. Was It the Jabberjays or Did You Just Say You Think I’m Hot?

The Jabberjays weren't too nice to Katniss, but that doesn't mean they can't help you out.

3. Are You an Avox? or Am I Just Leaving You Speechless?

Getting your tongue cut off so you're unable to speak doesn't sound all that romantic, but this line is cute nevertheless.

4. Are You from District 12? Because I’m about to Make You Mine

There are tons of different lines you can get from the different districts. I mean, District 3 works with electricity and District 7 deals with wood. Do with that what you will.

5. Did a Cannon Just Sound, or is That My Heart Beating for You?

The cannon represents a horrible tragedy, but that doesn't mean it's not perfect pick up line material. Nothing's off limits.

6. May as Well Move You into the Victor’s Village, 'cos That Body’s Winning

Typically, pick up lines deal with one's attractiveness. This one is great for admiring someone's beauty, without being too crude.

7. What Are the Odds of You Being in My Favor?

Here's another super-popular line from the film to use to your advantage. Everyone knows this, so how can you go wrong with it?

8. Did You Lose an Arrow? Because I Found One in My Heart

There are so many jokes you can make about Cupid's bow and arrow. This is one of the simplest, yet still adorable, ones.

9. Are You the Girl on Fire? Because You’re Setting My Heart Ablaze

This is a bit different than telling someone they must be the girl on fire, because they're so hot. It twists your expectations.

10. I’m a Gamemaker, but I Won’t Play Games with Your Heart

No one wants to be get their heart broken. This is a cute way to show that you're not the type to mess around.

11. Are You a Mutation? Because You Are Way Too Gorgeous to Be Human

This one's a little silly, but humor is the best way to attract someone. As long as they don't see it as an insult, it's pretty funny.

12. When We Get Together, Even the Birds Will Stop to Listen

This can be taken sexually, but it's still a sweet thing to say. It's bound to produce a smile.

Katniss says this about herself in the books, but it works as an amazing compliment. Who wouldn't want their looks to be compared to the sun?

These pick up lines might not score you a hot date, but at least they entertained you. Are you a huge fan of the Hunger Games? Who's your favorite character?